My name’s Albert and I’m going to share with you an experience I had last year. I hope you like it.

THE WEEKEND OF MY LIFE

We all have interesting weekends. However, for some reasons there is always a special and different one. Mine was when I took part in the Final Four of basketball.

That weekend started on Friday at exactly 10.30 p.m one year ago. While I was having dinner, my coach phoned me and told me that I had been called to play in one of the most popular tournaments in Europe. The match started on Saturday at 19.00. We arrived at the sports center at 16.30 and obviously I was astonished when I saw the crowd.

The next day we had to play the Grand Final Four in that historical place. It was 75-75 draw when there were 20 seconds left. Suddenly, the coach decided to call time-out to organize a new strategy specially for me. As the time went by, Mike, who was one of my team-mates, was not sure who to pass the ball. I appeared on the 6.75 line and carried out the strategy. Fortunately, everything went smoothly and we won the match. That was so amazing because I had never been involved in such a great tournament.

In conclusion, I have always been working hard to be in one of the best tournaments in Europe. Therefore, I can strongly say that it was the happiest and deserved weekend I have been waiting all my life. 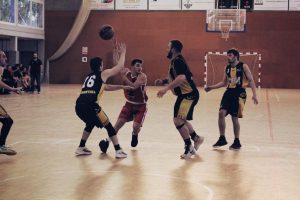