I’d like to share with all of you an experience that one of my students had when he went on a trip to Africa. I hope you enjoy reading this story because it’s very interesting.

MY HOLIDAY IN NAMIBIA

My name’s Ramon and I’m going to talk about my trip to Namibia, Africa.

The flight was long with only one stopover because there are no direct flights from Barcelona to Namibia. The flight lasted seventeen hours in total.

In Namibia there are different places to visit. Some of them are by the sea, where they can be 10 degrees C. Other places are thirty kilometres inland, where can reach 40 degrees C. Most of the country is desert and savannah. The total extension is more than 800,000 Km2 and only lives 2.5 million people.

Roads in Namibia are generally pretty bad because more than 70 percent are sand tracks with many irregularities. The rest of them are in good conditions.

The lodges where my wife and I stayed in were in general quite small because they had no more than 20 bungalows. They were always located in places where they found water. Therefore, they have vegetation and swimming pools. These lodges are close to national parks or in tourist areas. The local food surprised us pleasently as it was quite varied and well prepared. We ate game bird, springbok, kudu, crocodile, zebra and Oryx, which is one of the symbols of the country. It is represented in the national coat of arms.

The population in Namibia is composed by more than 80 percent of black indigenous tribes. However, white people are only represented by 6 percent.

The economy is mainly based on exports, meat, fish and mineral. Uranium is the most important. Tourism has grown a lot in the recent years. Agriculture is testimonial and it is only for survival due to the type of farmland in the country.

Wildlife is one of the most important in the world as much of its diversity as for animals that live there. Most of them live in national parks. Those we visited were the Namib Desert and the Etosha National Park. The dunes in the Namib Desert are spectacular due to their red colour and shapes, but no animals there. However, in the Etosha National Park we could see many animals like zebras, Oryx, blue wildebeest, rhinos, giraffes, elephants, kudus, springbok, impales, squirrels, hyenas, lions, foxes, jackals and many birds.

Finally, I can say that it has been a fantastic holyday and I have been a great time. 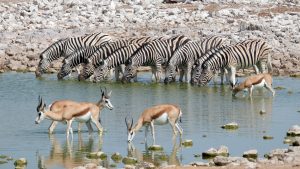