As you probably know on 17 March is a very important day in Ireland. The Irish celebrate St Patrick’s Day, the patron saint of Ireland. I would like you to know some things about him: who he was, where he came from, what he did and so on. I hope you enjoy reading this.

Patrick is said to have died on March 17 around the year 493 DC and was buried at Downpatrick, Ireland. He grew up in Roman Britain, but was taken to Gaelic Ireland as a slave. After some years there he returned to his family and entered the Christian church, like his father and grandfather did before him.

According to legend, Patrick returned to Ireland as a missionary and spent many years evangelising in the north and west of the country and converted the pagan Irish to Christianity. It is certainly thought that Patrick banished snakes from Ireland, which were the symbol of druids or worshipers of snake gods. Saint Patrick used the shamrock to explain the Holy Trinity to Irish pagans. Icons of St Patrick depict the saint with a cross in one hand and a sprig of shamrocks in the other hand.

The shamrock is the most common symbol of Ireland nowadays. The colour green has been associated with Ireland since 1640s and it is used to wear clothes and accessories on St Patrick’s Day parades around the world. There are other Irish-related symbols on St Patrick’s Day like the harp, which was used in Ireland for centuries. Another one is a mythological creature called the leprechaun and a pot of gold that the leprechaun keeps hidden. There is a tradition at the end of celebrations; a shamrock is put into the bottom of a cup, which is filled with whiskey, beer or cider. It is drunk as a toast; to St Patrick, to Ireland, or to those present. The shamrock would be swallowed with the drink, or be taken out and tossed over the shoulder for good luck.

Well, now you know a bit more about St Patrick’s Day and where the legend comes from, the tradition and celebration. So go to Ireland and join the Irish to celebrate the patron saint of the Emerald Isle. 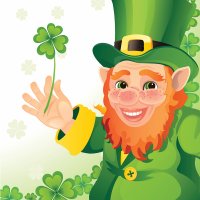 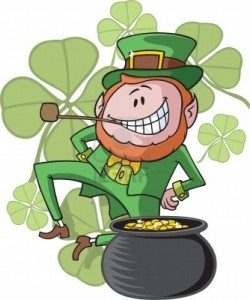