Have you ever asked yourself what the origin of the Easter bunny is? I would like you to know something about it. Do you celebrate this ancient tradition? Read this and find out its origin.

It is commonly thought that the word Easter comes from a pagan figure called Eastre who was celebrated as the goddess of spring by the Saxons of Northen Europe. This theory has no basis in history nevertheless. The existence of a goddess called Eastre or a spring festival in her honour is a conjecture. Likewise, nobody knows for sure the origin of the Easter bunny and Easter eggs. All we can say is that the word Easter is probably related to the word Osten, in German, and that the Saxons had a month they named Eosturmononath.

Here, in Catalonia, this tradition is celebrated in a totally different way. For some Catalans Easter has a religious meaning, depending on each family of course. Generally speaking, in Catalonia is celebrated a special day which is called “el dia de la mona”. In the past godfathers used to give their godchildren the Easter egg made of chocolate. The godfather will take care of their godchild in case parents die. This is a gesture of goodwill and it is symbolized giving the Easter egg as a present. Nowadays, this tradition is much more commercial and the Easter egg became a cake with figures of well-known cartoon characters, which appear on the big screen or on TV.

From your point of view, what is the meaning of Easter, religious or merely “el dia de la mona”? Whichever it is there is nothing evil about the Easter bunny in spite of being a pagan celebration. What is really important is your belief. Everyone is entitled to their own opinion. If your focus is on Christ, you will understand that the Easter bunny is just a symbol. Easter might be a time to reflect upon and celebrate the resurrection of Christ or might be a time to have a holiday.

Well, I hope you have enjoyed this. Have a nice Easter. 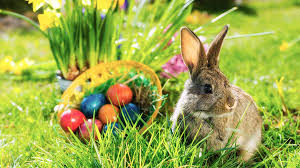 1 thought on “The Origin of the Easter Bunny”