Summer is finished and people came back to their daily routine: teachers and students back to school and adults to work. Here comes autumn and Halloween is just around the corner. It’s time to eat chestnuts, sweet potatoes and small dense cakes, well-known as “panellets”. We can see stalls of “castanyeres” in the streets of Mataró, who have been roasting chestnunts and sweet potatoes over the years.

But, what about the Anglo-Saxon of Halloween tradition? To what extent do you know the story behind it? This ancient pagan celebration comes from the Celts, which the night of 31st October was widely believed that the dead appeared from their graves to visit the living. This legend is also associated with Jack O’Lantern, a very popular Irish man, whose reputation wasn’t very good among the locals where he lived.

Would you like to know Jack O’Lantern origins? It’s nothing to do with we can see on TV and films. Let’s find out, and I really hope you enjoy reading this funny story.

According to Irish folklore, a man called Jack (Stingy Jack) well known for his drunkness and quick temper got very drunk at a local pub on All Hallow’s Eve. He met the Devil outside the pub because he wanted Jack’s soul. Jack asked him one more drink but he dind’t have the money to pay. So the Devil took the shape of a coin and Stingy Jack put it into his wallet that had a cross-shaped catch. Jack agreed to free the Devil under one condition; he should let him live for another year. So the Devil accepted.

First jack was good then he slipped back into his evil ways.

The following year the Devil reappeared and asked Jack to accompany him. Stingy Jack told the Devil to take an apple from a tree; when the Devil climbed up, Jack hurriedly placed crosses around the trunk of the tree. The Devil was trapped again and was then unable to get down the tree. This time Jack asked the Devil ten more years of life in exchange for his freedom and made him not to take his soul when he died. Again the Devil had to accept. Once the Devil promised not to take his soul,  Stingy Jack removed the crosses and let the Devil down.

Unfortunately, Jack died almost a year later. He went to the Pearly Gates of Heaven and was told by Saint Peter that he was too mean, too cruel and had led a miserable and worthless life on earth. Stingy jack was not allowed to enter Heaven. He then went down to Hell, but the Devil recognized him and kept his promise and refused him admission. Now Jack was scared and had nowhere to go but to wander about forever in the darkness between Heaven and Hell. He asked the Devil how he could leave as there was no light. The Devil gave Jack a piece of burning coal from the flames of Hell to help light his way. Jack put the piece of coal into a hollowed out turnip, one of his favourite foods which he always carried around with him whenever he could steal one. For that day onward, Stingy Jack roamed the earth without a resting place, lighting his way as he went his “Jack O’Lantern”.

Since then, on All Hallow’s Eve, the Irish used to hollow turnips, rutabagas, potatoes and beets as lanterns and use them on Halloween night as festival lights. They placed a light in them to ward off evil spirits and keep Stingy Jack away.

In the middle 1800’s (1845-1850) the Irish suffered a terrible famine, known as “The Great Hunger”, making more than 700,000 people emigrate from their country to the USA. The Irish brought the traditions with them. They couldn’t find turnips in America but quickly discovered that pumpkins were bigger and easier to carve out and were suitable substitutes to make Jack O’Lanterns. Since then, pumpkins are an essential part of Halloween celebrations.

“Trick or treat” began in the United States in the 1930’s. It’s a traditional activity at Halloween, in which children dress in costumes as ghosts, witches etc. visit houses. At each house they say “Trick or treat?” This means that the threaten to play a “trick”, or joke, on the people in the house unless they are given a “treat”, e.g. sweets or money. The practice of “trick or treat” is now very common in Britain also.

Have a nice Halloween 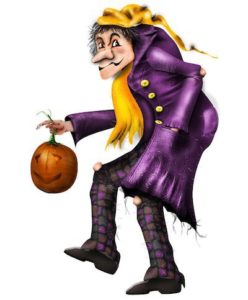